I’ve been thinking about the transit expansion plan for Nashville for a while now and even made this network and density map a few weeks ago but hadn’t written about it yet.  I think it was partly to see what happened and also what more opposition would say and how they’d be rebuffed. 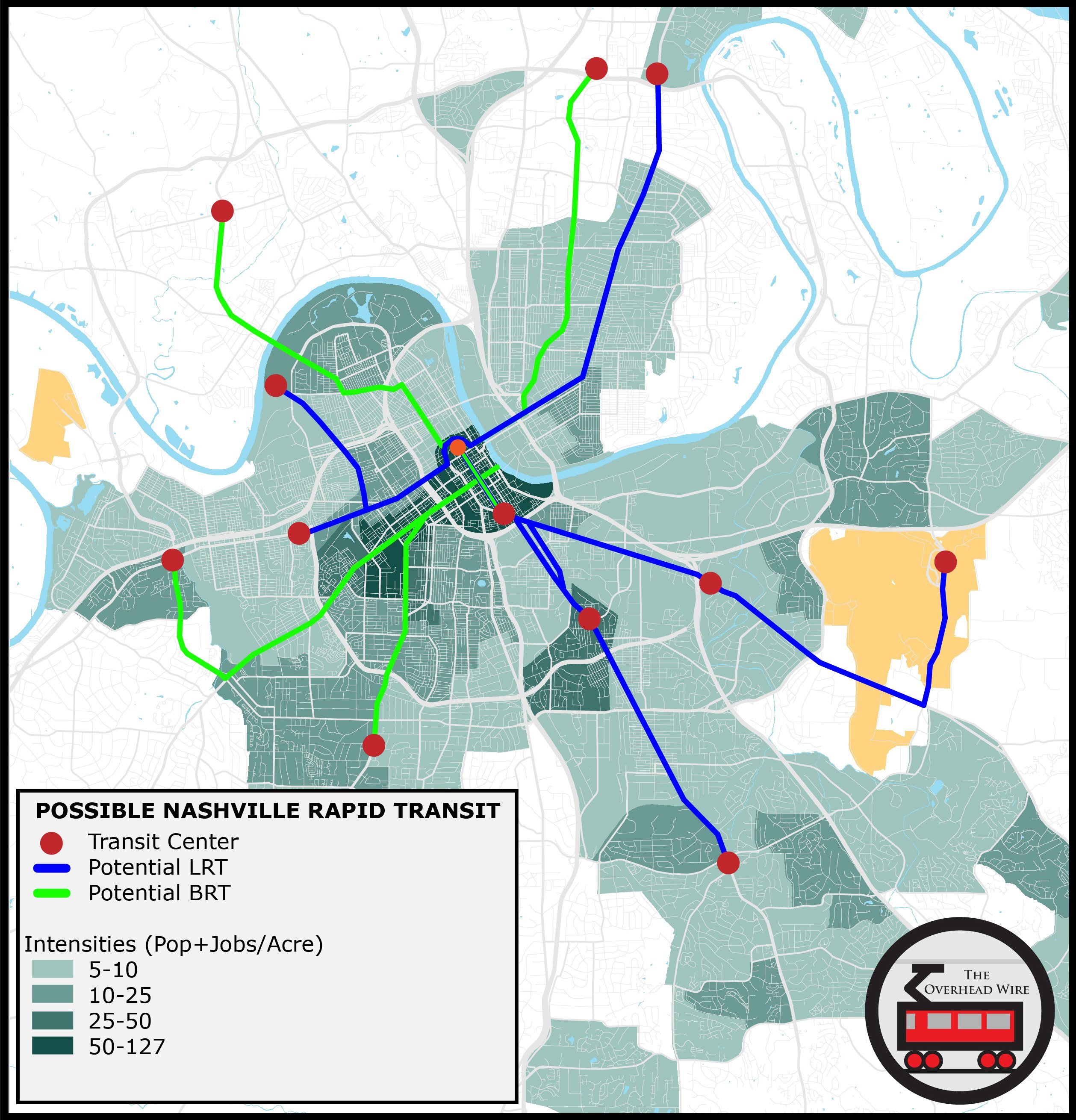 I generally ignore most libertarian sentiment that’s printed whether its from Cato or Reason because it really doesn’t matter to me what O’Toole or Cox or their ilk say since there is no point of agreement I could possibly have with them.  But there are others I read and watch that were in opposition that I wanted to push back on a bit.

The first I wanted to address were from Aaron Renn, who many of you know as The Urbanophile. I like Aaron and listen to his podcast yet disagree with a lot of his views on cities these days. When I saw his article I was a bit bothered that it insinuated that most of the investment would be in light rail, when in reality there’s investments in bus frequency, 25 miles of bus rapid transit, and other investments.  Additionally the downtown tunnel makes a lot of sense if there is to be travel time savings for transit lines over autos.

But his claim is that cities outside of New York and other legacy cities don’t have the makeup for transit.  I guess we’ve been arguing this chicken and egg problem for a long time but I don’t believe it.  Houston and Phoenix have 50-60,000 riders on single lines. Why shouldn’t they have them? You can make an argument for dedicated lanes and serving employment centers instead of being in the middle of nowhere, but that’s not his argument.

He also claims using old 2011 data that there’s not enough jobs downtown. We know that employment is a large driver of transit ridership so it’s a good metric to use.  But he didn’t do his homework outside of checking some old data from Joe Cortright.  His resident data is even older, using 2010 numbers.  We are approaching 2020 here and a lot changes in 10 years.

“According to the very pro-downtown City Observatory, Nashville only had 143,000 city center jobs in 2011, about 21% of the region’s total jobs.”

If I use even the most recent 2015 numbers from On the Map, I found over 200,000 jobs in the core surrounded by Interstate – 440.  There are 478k jobs in Davidson County and 898K in the larger MSA.  That’s more like 41% of the county jobs in the core and 22% in the MSA.  This is a territory of statistics where transit opposition always claim the largest number they can instead of service areas or areas served by transit.  That 5% of people in the US use transit number is ALWAYS annoying and always skewed by the vast geography of the United States.  I hear LA is denser than New York City too.

It probably could have just been left alone and I wouldn’t have written this post if it weren’t amplified in a Nashville Business Journal as a “Transit Expert” against the plan.  I could be against this plan as being kinda optimistic in a sprawling place, but at least use recent numbers and good data to make the claim. This in my opinion is partly a problem with underpaid journalists being given a story to cover without knowing the subject matter.  Thus the lame framing fight that has to happen in local media where there’s a government for something and opposition against instead of having a more intelligent discussion about why it’s needed and what is the longer term strategy for the specific plan with pros and cons.

As an aside, another claim was that self driving vehicles will save us all. Please save me from this constant argument.

This claim was made by local Metro Council Robert Swope who believes no one will need transit in 15 years.  The investment was also disputed by Steve Polzin, who claimed we’ll definitely have self driving vehicles in 40 years which is the useful life for this particular project, ignoring the ability of a rail line to be driverless before any of these other vehicles.

Of course that was rebutted fairly quickly in an op-ed by TransitCenter discussing the basics of geometry that techno-futurists seem to not understand.

Finally to follow up on the initial job data analysis I made a map that looked at employment and residential density along the new light rail and bus rapid transit lines using the most recent data I could find. It looks like there’s pretty good density to support most lines but I’m still baffled why airport lines are so beloved.  That is most definitely a waste of money segment but I guarantee you it was put there to generate votes. Did we have to vote for highways? No?

Other than that there’s a good mix of modes, the downtown tunnel serves a dense employment core and the area around the universities and medical district is connected to downtown.

If I had ~$6B to spend I would still do the downtown tunnel and have light rail/BRT on major corridors but would take the airport line money and use it for better existing service.  I would create a plan for automating the light rail and bus lines and figure out how to make the frequencies in the next 10-15 years be 5 minutes at all times.  I think that’s the key to any future proposal and this system will be important even with self driving four door vehicles.  Because if you give transit lanes and these self drivers are clogging the roads in their minivans or sedans, it will be a breeze to just skip right past them all.

I found this quote apt from an article on buses and leadership in Route Fifty yesterday.

“If you ever wanted an advertisement to get people out of their single-occupancy vehicle, it’s having a bus beside them going three times the speed they are.”

What do you all think?  Tell us on twitter @theoverheadwire

Sign Up for a Free Trial of The Overhead Wire Daily and get our daily email and access to our archive of over 40,000 urban issue links tagged by topic and city.